August 29, 2015. That is the day Paul & I’s lives changed forever. I suspected I was pregnant but I didn’t want to get Paul too excited. We had been hoping for a baby for a few months but if Paul had it his way, we would’ve already had one baby & be working on baby #2. So, I woke up and sneaked into the bathroom while Paul was still sleeping. Once I saw the test was positive, I freaked out. That was my first time taking a pregnancy test so I’m pretty sure I read the instructions on the box about 50 times to make sure I was reading it correctly.

I woke up Paul with the news and I’ll never forget the look on his face. We were in shock but so excited!! We had been hoping and praying for this baby, it was a miracle.It just so happens, I was supposed to be flying out to Austin that morning to attend a Kelly Clarkson concert. Sidenote:If you know me, I’m a HUGE KClark fan. So much so that I refer to her as “Kelly” like we’re besties. She’s amazing and it could not have been more fitting that baby’s first show was KClark!!

Over the next few weeks, we told our families and friends. We scheduled our first appointment at the doctor. My awkward self did not know what kind of appointment to ask for so I literally just yell-talked “I’m pregnant! I don’t know what comes next” at the receptionist..thankfully she knew how to handle my hot-mess of a self. We were told we couldn’t come until we were around 11 weeks along…WHAT? That felt tortuously long.

October 23, 2015. This is the day we found out we were having a GIRL! Our nurse called to let me know that she had the gender and would be calling to leave a message on my voicemail. Paul & I were in a wedding that night so we met in our car before the ceremony to find out the gender of our baby. When the words “you’re having a girl” came through our speakers…I couldn’t believe it!! We were so excited :)! A week later on Halloween, we made our announcement to the world, okay, Facebook world! I dressed as a Mummy & Paul was Darth Vader…get it? “Mummy” & “Darth Vader”? We’re nerds, I know.

Naming was difficult but we made our minds up early. Paul came home with a list of names and Cora was on that list. From the moment I heard it I was in love. It was so beautiful, so classic. And I was in love with the fact that Paul picked it out. My dad picked my name out so it pulled on my daddy’s girl heart strings.

In January, we were told that Cora was a little underweight and then referred to a high risk doctor to get extra look at her. We spent the following two months going to the HR doctor to track our girl’s progress. She was putting on weight appropriately and there were no other red flags in her sonograms. We thought we were in the clear.

March rolled around and we were preparing her fabulous nursery. Along with KClark, I’m a HUGE Harry Potter nerd. Huge doesn’t even do my fandom justice. So, I decided I must have a Harry Potter nursery because after all, if I was going to be in there at 3am for feedings…I needed to be in my happy place.  I was also thrown a gorgeous Harry Potter themed shower. The ladies (and men) in my life gave me the most perfect, detailed shower! So much love and thought went into that day, Cora & I were so honored. 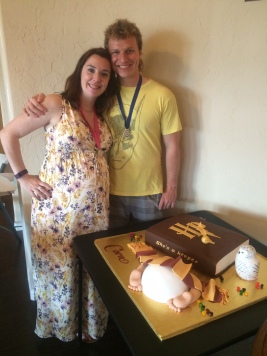 April 7, 2016. I went to the doctor for my 37 week checkup. I laid on the table and answered all the normal questions my doctor was asking. She pulled out the fetal doppler to find Cora’s heartbeat and it was taking longer than usual. However, we’d had trouble finding her heartbeat before, she moved around so much and never cooperated when I was at the doctor. So, I sat on the table thinking, we’re just having some troubles…nothing is wrong. Then the doctor said she was going to get the sonographer to see what was going on. I distinctly remember the nurse coming and grabbing tissues and I remember thinking “hhmm that’s weird and a little presumptuous” after all..we hadn’t turned on the sonogram yet.

After a few seconds of looking at the sonogram, my doctor informed there was no heartbeat. I remember thinking she hadn’t looked at the screen long enough or maybe it was a mistake. Come on, I had heard her heartbeat 7 days earlier…seven freaking days ago her heart was beating just fine. The nurse asked if I wanted her to call my husband, I said no. I couldn’t bear him having to hear this news from someone else. I called Paul and all I could say was “I lost the baby”, “We lost Cora”, “Cora is gone”. None of those words made sense coming out of my mouth but I couldn’t utter the words “dead”. I still have trouble saying that. At this point, I hadn’t cried yet or broken down. I just sat in her office and stared at the wall. I remember asking her “nothing? there wasn’t anything on the sonogram?”. I knew at that point that there was no hope, nothing.

Paul arrived at the office and I broke down in his arms. I’ve never cried like that in front of anyone in my life. I was so brokenhearted for us. We wanted this baby more than anything in the world. We talked about her every day and what our lives would be like once she joined our nerdy, silly family. Paul was meant to be a father, his love knows no bounds. The guilt of denying him that chance set in immediately. Once we gathered ourselves, we sat down with our doctor to ask what comes next. She told us that we would need to induce that night and probably have Cora the next day. My mind froze. I would still have to give birth to Cora, like real birth. This was the first time that I became terrified. I was scared of birth anyway but now I had to go through it without a living baby to hold.

Reality started to sink in for both Paul & I. We knew that we would need to cling to each other now more than ever. Our marriage of less than two years was about to be tested in the cruelest of ways. Our doctor sent us home to gather our things and asked that we return back to the hospital that evening. We went home and wondered around the house for a while. We made the heartbreaking phone calls to our family and closest friends. Each time we had to tell someone, it was like another wave of heartbreak smacking us in the face.

After we gathered our things, we headed up to the hospital for what we knew would be the longest 24 hours of our lives. We got to the hospital & got checked in. I am so thankful we delivered at Baylor in downtown Dallas. They had a clear process in place that made our situation the best it could and did not cause us to have any unnecessary stress or pain. In the weeks after Cora’s birth, I came to understand just how important Baylor’s process for infant loss was to my healing.

April 8, 2016. Cora was born Friday evening. She was 21.5 inches long, 5lbs 11oz. The staff did an incredible job allowing my body to progress in the labor. Their goal was that I not feel any (physical) pain and that they preserve my body so that we could have children in the future. I was so terrified of giving birth so the fact that I only pushed once for Cora was a miracle. I’ve always heard the phrase “God is in the details” with no real clue what that means. Cora’s birth and my physical recovery is proof that God was in the details that day.

We spent time with Cora after she was born. I’m not going to sugarcoat it, I was terrified. This is not what holding my first child was supposed to be like. I remember Paul leaning over the bed to say to me “I need you to be brave” when they were bringing her to me. I think he was saying it for the both of us. I knew she wasn’t there but I needed to honor her by holding her and telling her she is loved. And that she is missed. And that she will never, ever be forgotten. I kissed her forehead and marveled at her brown hair. I just knew she was going to have blonde hair like her daddy so when she had my hair, I was surprised! Again not sugarcoating it: she did not look like a newborn. I was not prepared for the red lips or cold skin. It was incredibly difficult to fight the urge of fear while spending time with her. This was the only time I was going to have with her on this side of Heaven. Now wasn’t the time for fear. But that fear subsided and all that was left was love. Pure love for this baby I would never hear giggle, never see run, never teach her to play volleyball or watch her dance with her father on her wedding day.

Our families came in to meet her and hold her. They were so brave. It was not easy for them to go through that either so I am eternally grateful they honored our daughter with their love. Seeing my parents and in laws having to hold their grandchild like that broke my heart. There were so many plans, so many dreams shattered that day.

The worst moment of my life was when they took Cora away for the last time. I remember handing her back to the nurse and I could feel the panic attack rising in my chest. I watched her put Cora in the bassinet and wheel it out the door. I watched until the door shut and then broke down in Paul’s arms again. The moments following felt like the entire world came crashing down. I literally felt like my heart broke that night. The pain in my chest was terrifying and uncontrollable.

I still have trouble giving babies back to their parents. Not in the creepy “I’m going to steal your child way”. It just reminds me that I had to give my child away and I never got her back. Someone told me this is called “empty arm syndrome”. It made me sadden that there was a term for this, that there was a need in the world to name this feeling. But oddly comforting. I’m not alone and it is a normal feeling.

My Cora’s life was brief but beautiful. She made me a Mother. She made me a better wife and Paul a better husband. She has given me a new perspective on life. A life on the bright side. I find her in the light. I see good things happen in the world and I think of her. Rainbows, kittens, strangers smiling, flowers blooming, my dog frolicking in the backyard…they all remind me of her. Like they are little nuggets of happiness she has sent to me from Heaven. Reminding me that she loves me too. That she wants me to live on the bright side because she’ll always be there waiting for me.