Today we hit 31 weeks with Crockett! Last week (at 30 weeks), we had two more appointments with our regular OB and specialist. Which means two more opportunities to see our chunky monkey :). Both appointments went really well, great in fact! At each appointment we have a sonogram done but both sonograms are looking for different things so at least it keeps me learning.

First up was our OB appointment. During this sonogram we spent time checking out his cord and the blood pressure within the cord. All checked out great! Then we spent some time watching for him to make “breathing” movements. We are able to see him practice breathing a few times which was pretty cool once I was able to see what we were looking for. Then she spent some time trying to get a 3D look at this face and also showed me how huge his feet are. She also spent time showing me the hair that was on his head…I would have never known that was hair. Cora had a lot of hair so hopefully this kiddo will too!

The next day we went to the specialist for a growth measurement. This kid is growing like a weed! He weighed in at 3lb 12oz which means he gained 12 oz in two weeks. She spent time measuring his (big) belly, head, and femur bone. Overall, he’s measuring around the 65% percentile so the doctor is pretty comfortable at where he is at. The growth charts indicate that he should be measuring around 3.5lbs so he’s overachieving by about 4 ounces. He spent the majority of this appointment kicking himself in the head which was highly entertaining! Literally his big toe was thumping right up next to his eye socket for over half the appointment.

Along with the 31 week benchmark there is another benchmark I’ve been getting lately. The dreaded: Is this your first? I’m not sure if it’s because I am starting to look wider than I am tall or if I am just running more errands but I have been asked this question almost daily over the last two weeks. Early on in the pregnancy I was scared of this question. Scared I wouldn’t know how to answer, scared of weird looks if I answered honestly, and scared if I lied when someone around me knew that I was lying. I do not have a very good poker face so I imagined making these situations so awkward.

I will tell you that I have given both answers. A majority of the time I answer that yes, this is my first. Why? To put it simple: its easier. I don’t have to stop and explain myself. I don’t have to worry about getting emotional. I don’t have to divulge way too much information to a person who is just asking in passing. I was so afraid this would make me feel guilty but it doesn’t. I remember Cora every day and I acknowledge her everyday. I wear her footprints around my neck every single day. Not to show the world that I am without a child but to carry a little bit of her with me.

I do not hold it against people who ask me if this is my first. Honestly, they are just trying to be nice and share in the excitement of a child. And you know, it’s a good reminder that this should be celebrated! This baby, this pregnancy should be celebrated! The loss of Cora was so deep and so heartbreaking that it makes the joys even sweeter. Am I scared that I am going to lose him? Of course! How could I not be? But when I can allow myself to celebrate and enjoy him, it’s very freeing. Reminds me of how I felt the entire time with Cora :).

There have been a few times that I have given the honest answer. Something about the moment or the person allowed me to confide in them. One of the coolest moments was when I was about 6 weeks pregnant in Taos, New Mexico. I was getting a prenatal massage and the woman asked me the question. I thought about it for a few moments and just decided to tell her the truth. Turns out she used to be a grief counselor and we spent the entire hour talking about grief. Talking about processing the grief while fostering healthy emotions for this pregnancy. It was an incredibly healing and surprising conversation. It would not have happened if I hadn’t let myself be vulnerable in that moment.

All in all, getting to 31 weeks has been a roller coaster of emotions (or a glass case full of them 😉 ). I I had a moment of fear this week when he wasn’t moving as much in the morning as he usually does. I grabbed the fetal doppler and his heartbeat was as strong as ever. And then he spent the rest of the day kicking me and rolling around. It’s killing my back but boy do I treasure it. The sense of terror is so quick to return its almost overwhelming. I constantly have to battle the fear that something wrong is happening. If I could hug every loss mom that has gone before me I would because honestly, we are some strong ladies! No pregnancy is easy but pregnancy after loss has got to be one of the most difficult things I’ve ever done. Mentally and physically.

I am looking forward to spending these next 6 weeks preparing for our sweet boy. I’m going to try to let in moments of excitement for him instead of the constant fear that something is going to go wrong. It’s not easy but I will make an effort. I owe it to myself, to him, and to Cora to keep on looking for the bright side <3.

​A huge yawn from his 30 week sono. He’s totally bored with this process.

Anyone else think this kiddo is going to look like his dad? That nose looks so similar! 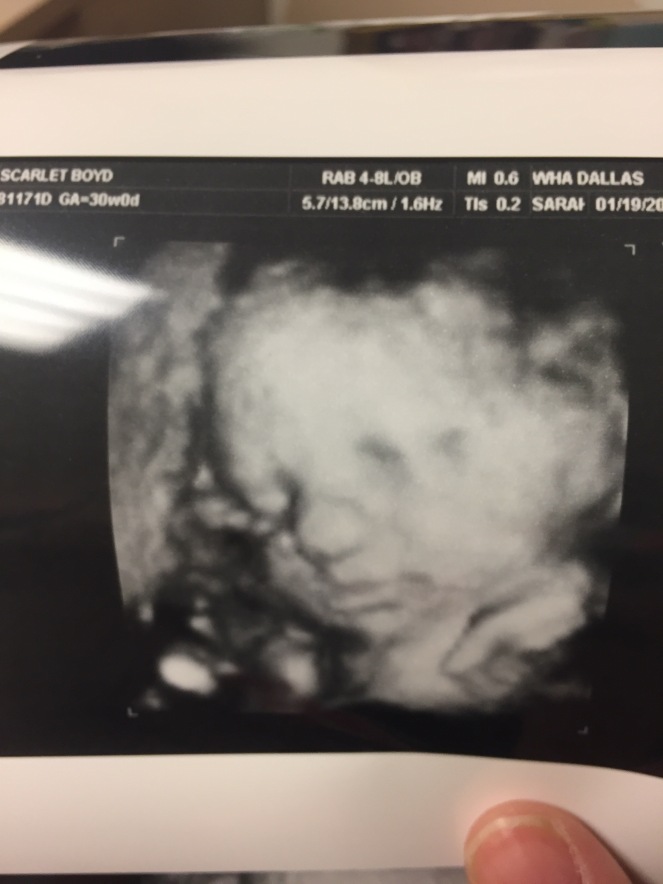 Another great shot of his face!

Cheers to the Bright Side ❤️.